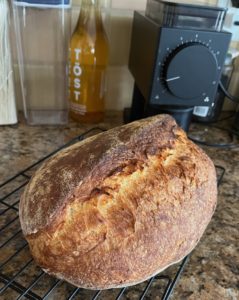 Preheating ovens is a waste of time

This is a simple 65% loaf, with 500g of flour. No big deal, pretty standard, but the thing here is I got really lazy baking it. I’d heard that you could skip the oven/dutch oven preheating step and just toss the loaf into the oven cold. Since the loaf had already risen well before baking I figured my worst case was an OK loaf, but… this one worked out really, really well.

Baked in a 450F oven on fan, inside a french oven. (Which is just a dutch oven only without the lip on the lid to hold coals) Put the loaf into the cold pot, put the pot in a cold oven, turned on the heat, and let it go for an hour. Then I took the lid off and let it go for another 10 minutes to finish.

This worked great. Seriously, lovely loaf, the crust was all crackly while I took this pic and I’m quite looking forward to dinner and a chunk of this. I don’t think I’m going to bother preheating the oven ever again, at least not for simple lean loaves like this.

Also, entirely separately, the Fellow Ode grinder in the background remains awesome. Silt-free french press coffee is lovely and my only regret is not getting a nice grinder earlier on in our communal zombie apocalypse.

Really really lemon cake. Seriously, that frosting is about 1/3 lemon juice by weight. Yes, I know, both my food photography and food styling skills need work. Gimme a break, we’re in a zombie apocalypse, I don’t get much practice.

The recipe is simple:

Beat the butter until it’s light and fluffy. Beat it a lot. Once it’s fluffy start adding in the pastry cream one spoonful or so at a time, beating to incorporate. When all the pastry cream is added and the frosting is fully beaten (it’ll be a normal buttercream frosting consistency, fluffy and reasonably spreadable) then you’re done.

If your butter is too cold the frosting will be a bit thick and hard to work with, and if it’s too warm it’ll be thin and a little loose. Like with all other buttercreams, or most anything else that uses butter, temperature is important. If you’re somewhere warm, add extra corn starch to the pastry cream (it can handle up to about twice what my linked recipe has) which will make the pastry cream nearly solid but lightens up with the butter and helps offset higher temperatures.

This is enough to frost an 8″ or 9″ round cake. It might be a bit tight with a 9″ if you frost the middle, too, but seriously don’t do that — the middle layer should be something else that complements the cake and buttercream. (In mine here it’s lemon curd)

German buttercream frosting is great because it’s so simple, doesn’t require molten sugar, and you can make up the pastry cream ahead of time. If I want an actual white frosting I’d use something else (probably a Swiss buttercream made with goat butter) but for anything else? This is my current go-to frosting.

The other thing you have going for you here is that you can pack a huge amount of flavor into the frosting. Most buttercream frostings are buttery and sweet, but only mildly flavored. Some people like that but I prefer something with a bit more presence in the cake, and that’s what you have here. In the pic the (somewhat amateurish) cake is frosted with a buttercream that’s about 1/3 lemon juice by weight. It’s intensely lemon, and even though I added a bunch of sugar (almost 200g of powered sugar) it’s still really sour and it’s just awesome.

It’s really hard to get anything even close to that intense a flavor from other kinds of buttercreams. In some cases, where your flavoring agent is dry and intensely flavored like with freeze-dried berries, you can manage but it’s hard and you’re limited in the flavors available to you. For a German Buttercream, as long as your intense flavor is liquid you can go wild with it.

An apple spice cake with apple-cider frosting? Just make your pastry cream with cider and that’d be awesome and now I want it. Cranberry frosting for a chocolate-cranberry cake? (Or, at least, a  chocolate cake with a cranberry chutney filling and cranberry-juice-based frosting) Nice.

Once the office re-opens I fully intend on making a rich chocolate cake and a Jameson’s frosting. (Which, if I math out right, will be about 10% ABV (maybe a little less, there’s air in that volume), so eat responsibly when it happens)

Pastry cream is a simple starch-stabilized variant of a custard. Traditionally it’s vanilla flavored, with some sugar and faffing around with tempering your eggs and such, but it turns out that’s not actually necessary.

Optional: sugar (75g gives a reasonable sweetness most of the time)

END_OF_DOCUMENT_TOKEN_TO_BE_REPLACED

After far, far too long I have finally moved the site off the old struggling Mac Mini and onto something a tiny bit more modern. Yay!

Wherein Dan goes on about things again. Baking and computers, mostly, as one does.